Watch the video for High Voltage from Linkin Park's Hybrid Theory (Bonus Track Version) for free, and see the artwork, lyrics and similar artists. High Voltage (3) IMDb 3.8 1h 31min. Rentals include 30 days to start watching this video and 48 hours to finish once started. 5.0 out of 5 stars Rock music.

(Redirected from Shot in The Dark (AC/DC song))

'Shot in the Dark' is a single by Australian rock band AC/DC from their seventeenth studio album Power Up. The song was recorded late 2018 to early 2019.[1] It was released on 7 October 2020 at 3:00 p.m. (in Australia),[2] and is the band's first single released since 2015's 'Rock the Blues Away' from their album Rock or Bust. The song will be used as the official theme for WWESurvivor Series.

On 1 October 2020, the band teased the new single in a 30-second video posted on Twitter, appearing to power up the amp with its iconic lightning bolt logo while playing the song, and noting PWR/UP, short for Power Up.[5] AC/DC went on hiatus after completing their Rock or Bust tour in 2016, which featured Guns N' Roses singer, Axl Rose. In 2018, members Brian Johnson, Phil Rudd, and Cliff Williams rejoined the band after the two-year hiatus. On 5 October 2020, the band shared another short clip composed of behind-the-scenes footage featuring brief appearances by all five members of the band.[6]

'Danger! High Voltage' is a song by American rock band Electric Six. It was released as the band's debut single and the lead single from their debut studio album, Fire (2003), in 2002 as a 7-inch vinyl. It was re-released by XL Recordings on January 6, 2003.[1] It peaked at number two on the UK Singles Chart. It received positive reviews from critics and was named Single of the Week by the NME.

Jack White of The White Stripes, a fellow Detroit native, performed the secondary lead vocals on the track.[2] Members of the band have claimed in interviews that the singer was an auto mechanic named John S. O'Leary and not White,[3][4] although music critics suspected this name was a pseudonym for White.[5][6]

The song was originally recorded in early 2000,[7] when the band was under the name The Wildbunch. They were forced to drop this name following legal pressure from the Bristol trip hop collective of the same name.[8] The later album and single version was produced by British music producers, Damien Mendis and Stuart Bradbury—who also created club mixes under the name of Soulchild.

The New York Times called the song 'catchier than anything on the radio by the White Stripes.'[9]The Guardian called it 'insanely catchy', though 'the archetypal comic novelty single.'[10]Josh Tyrangiel with Time magazine also praised the track.[11]NME's Piers Martin wrote '[Electric Six] rustle up the sort of pop-party thrash which sounds like the idiot half-brother to The Rapture’s 'House Of Jealous Lovers'. That good.'[12] The song is listed at number 234 on the best songs of the 2000s by Pitchfork Media. It was also featured in The Pitchfork 500.[1] Writing for The Village Voice, Amy Phillips said, 'The two men shout declarations of affection to each other over a sizzling Saturday Night Fever groove, and the sax sounds as if it's being played by someone with a long, luscious mullet. The video features taxidermy and a glowing codpiece.'[13]

The song is also featured in films Charlie's Angels: Full Throttle and Diary of a Wimpy Kid. It was used in commercials for Subaru, the TV show Malcolm in the Middle, animated series The Simpsons and the video game Forza Motorsport 6.[14]

The video for this song was produced by Tom Kuntz and Mike Maguire and stars lead singer Dick Valentine and actress Tina Kanarek outfitted with a brightly flashing codpiece and bra, respectively, as well as a similarly endowed moose, engaging in acts of lovemaking. Paintings featured in the video were created by artist Brian Rea.[15] 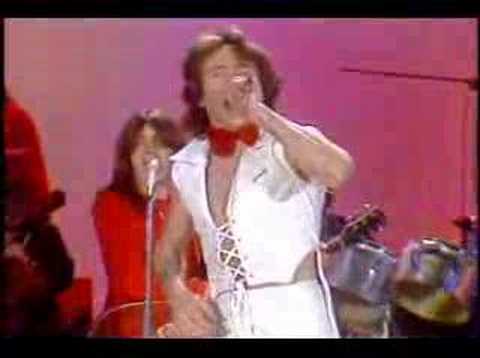